I hope it will be illuminating to share a vignette from the early life of Brother Hermitage, our truly medieval detective. I believe it explains quite a lot!

This troublesome agent fellow tells me found yet another picture of the events at De’Ath’s Dingle which he insists I post – no need to examine it closely he said. I do hope it is a serious contribution to the research of the period. I have also carefully searched for an appropriate image to grace the cover of the latest work, Hermitage, Wat and Some Murder or Other.  I believe I found exactly the right piece, but once again the agent said he needed to make a few minor adjustments. I do wonder some times if I am simply too trusting. A quite remarkable discovery when this agent fellow of mine delivered a large wicker basket full of manuscripts. He insisted I go through them in detail, even though it was the middle of the night, saying there must be enough in there to make another dozen novels. I have no idea what he’s talking about but he was getting quite loud and even started singing a rather disgraceful song.

He fell asleep soon afterwards mumbling something about the British Library and the Harley manuscripts 1498, folio 76 which did worry me rather.

Despite my concerns I was intrigued and explored the contents. At the bottom of the basket I found two colourful images and upon careful examination I dare to suggest the drawing of a tentative conclusion.

I hope readers will be familiar with the tale of Brother Hermitage and The Heretics of De’Ath. In this gruesome tale, the poor Brother Ambrosius is found dead after a debate of the great conclave. As far as I can make out, the images appear to be a record of the event.

I suppose it is not surprising that some scribe should make a drawing of the conclave which occupied Hermitage, after all, it must have been a significant event. What does seem remarkable is that this scribe would go to the trouble of drawing a second picture immediately after the fall of Ambrosius.

I do believe this is the only visual record of a medieval crime in existence. All I need to do now is identify which of the figures might be Brother Hermitage… I am gratified that The Domesday Book (No, Not That One) is being so well received. It appears to be in the Kindle charts around the world as a book of humour and of historical fiction. That it is not yet on the syllabus of University History degrees I can only put down to the controversial nature of its content.

It is such an academic work that it even has a map, the original of which hangs on the wall of the Scriptorium; just above the autograph of The Venerable Bede, which was sold to me by a rather doubtful chap in a market.

Meanwhile work continues on the interpretation of the next collection of Brother Hermitage manuscripts. From what I have deciphered so far, the good monk and his companion Wat are to be dispatched into the heart of the enemy to investigate some murder or other. I have thus imaginatively titled the work ‘Hermitage, Wat and Some Murder or Other.’

The rather pushy fellow who claims to be my agent says that I should come up with something more lively. He suggested “The Great Medieval Death Fest”, but I must confess I baulked at this, despite his assurances that it would “grab the audience” – which sounds both distasteful and unnecessary.

He tells me the ‘genre’ of medieval historical investigation is a cut throat business, often quite literally, and that I need to punch above my weight, whatever that may mean. I insisted that rigorous academic analysis would be more than sufficient, which he said was all well and good but was never very funny.

I know Hermitage and Wat do demonstrate some humour, but that’s hardly the point. He said not to worry as he would sort it all out in the edit.
I am ashamed to say the conversation became rather heated after that and I had to invite him to leave, which he appeared only too happy to do. He is never comfortable in the scriptorium, preferring the luxuries of soft seating, heating and the like.

I hardly dare tell the man that I have discovered yet another tale involving Hermitage, which appears to involve the Druids of all things. He will only get excited so perhaps I had better keep it to myself for now. 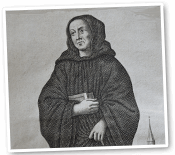